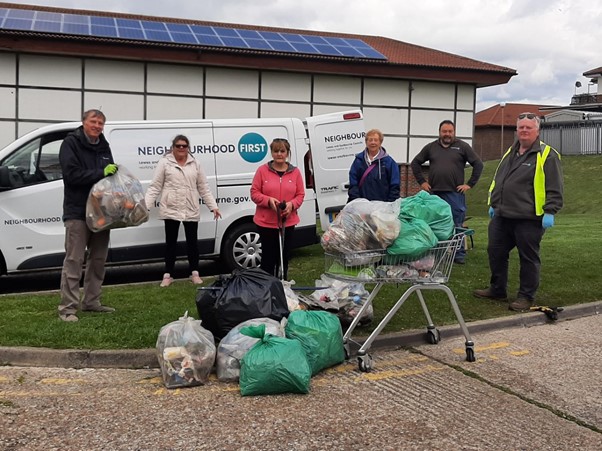 Langney councillors Candy Vaughan and Alan Shuttleworth joined local residents and Eastbourne Council’s Neighbourhood team in a Community Action campaign to clear rubbish from some of the areas where a lot of litter has accumulated and benefitted from a Litter Team approach. The first two action days were very productive and another 'Clean for the Queen Litter Pick' is being planned.

“We would like to develop this Community Action Team and visit other parts of Langney.  If you would like to join the Direct Action team and have suggestions for areas to visit please get in touch.”

We are also concerned about the number of supermarket trolleys which are abandoned around the area. We have discussed the matter with Tesco stores in the past, but we think more needs to be done to deal with this matter.

Cllr Alan Shuttleworth has been working with the Environment Agency and Eastbourne Borough Council on a project to clear the waterways in the park from plastic and other pollution. The worst areas of waterways are under the bridge near Bannatynes and the waterways in front of Causeway/Hazel Court schools in Larkspur Drive.

Our Langney Lib Dem councillor team are working with the Plasticfree Eastbourne group and Langney Shopping Centre on a project to provide a Refill Water Fountain at the Centre to try to encourage people to use refillable containers to get a drink.