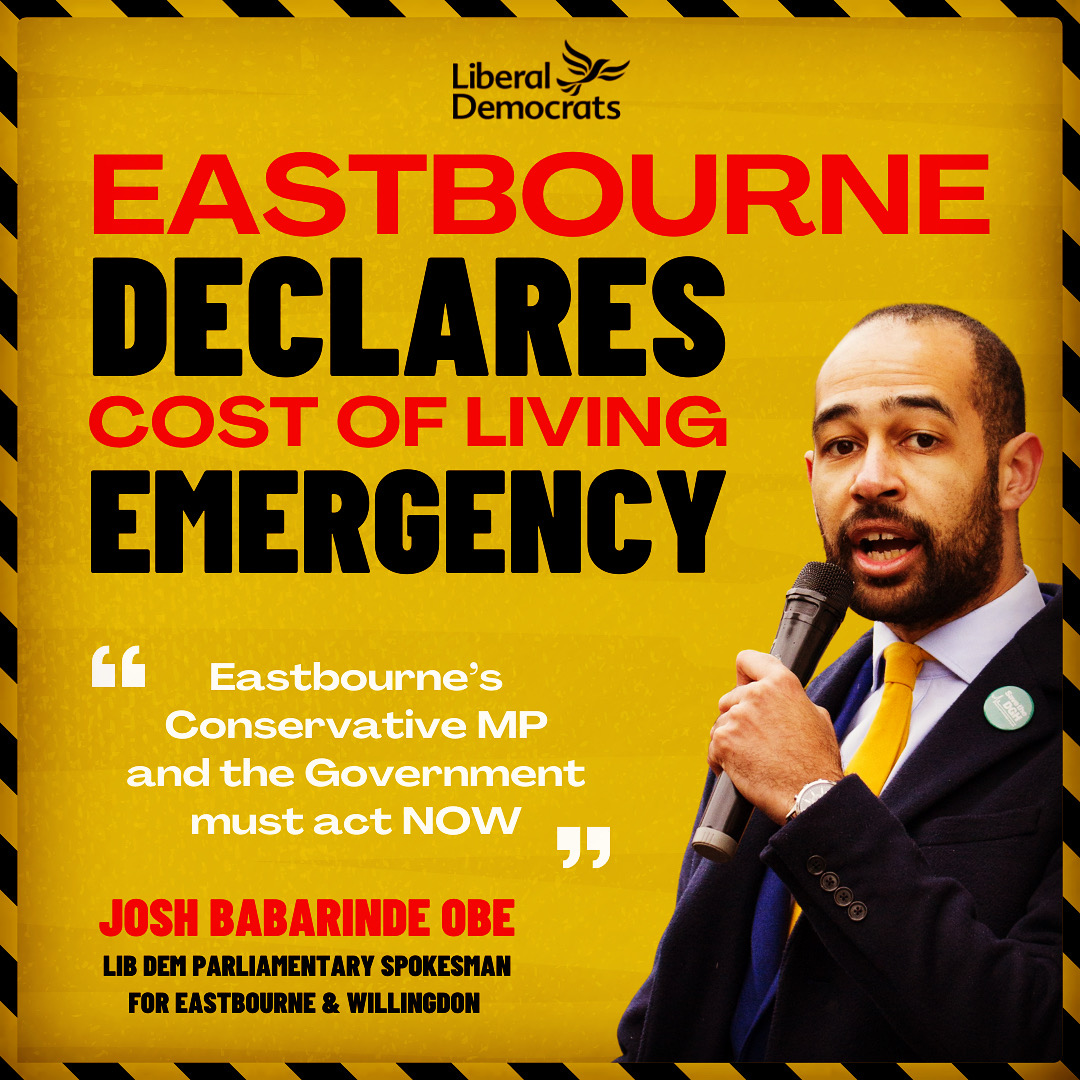 Cllr Josh Babarinde OBE on the Cost of Living Emergency:

"It breaks my heart that Eastbourne’s Foodbank has become the busiest in the country, according to the Trussell Trust. The Foodbank does incredible work but, in this day and age, it shouldn't need to exist in our town.

"It’s clear that the cost of living is spiralling out of control, with energy bills skyrocketing and so many struggling to make ends meet. For local pensioners like Jeanne (below), who I met with earlier in the week to hear her concerns rising bills, this is made worse by the pension triple lock being broken by the government – she’s been left even more out-of-pocket.

"For months, I’ve been campaigning for the Government and our MP to step up and make a dramatic intervention to support struggling families and pensioners. The response from Conservative MPs: ‘earn more money’, ‘work more hours’, ‘buy cheaper food’, ‘learn how to cook’. This demonstrates an appalling lack of awareness and compassion when it’s needed most.

"That’s why, this week, I led the charge to officially declare a ‘Cost of Living Emergency’ in Eastbourne to force the Government and our MP to wake up and act immediately.

"I did this through a formal motion at Eastbourne Borough Council on Wednesday 18th May. Together with an official 'Cost of Living Emergency' declaration, my motion called for the Government to:

"Thanks to the support of Eastbourne Liberal Democrat councillors, a ‘Cost of Living Emergency’ was officially declared, with the inspiring Howard Wardle (CEO at Eastbourne Foodbank) supporting this significant measure.

"In so doing, we have made history as the first town in the UK to make such a declaration, making regional and national news.

"Thank you to BBC News, ITV News, The Mirror, The Express, The Independent, Times Radio, GB News (and of course the Eastbourne Herald!) for amplifying my campaign and helping to make Eastbourne’s voice impossible to ignore. I’m disappointed (to put it mildly) that the local Conservatives refused to support this vital campaign.

"Many councils across the country have already been in touch with me to say they are going to pile on the pressure by making emergency declarations of their own.

"I’m convinced that this campaign will pressure the Government to provide more support for those struggling in this cost of living emergency. I will keep fighting for just that, as well as ensuring the Council plays its part, too.

"This declaration has also triggered the convening of the ‘Cost of Living Emergency’ summit that I am to host for our town.

"The summit will bring together those on the frontline of poverty-fighting locally to brainstorm local solutions to this emergency and speak with a united voice to push for a fairer deal for those struggling in our town. Invitations for this are already starting to go out. Watch this space."