Josh Wastes No Time In Rolling Up His Sleeves 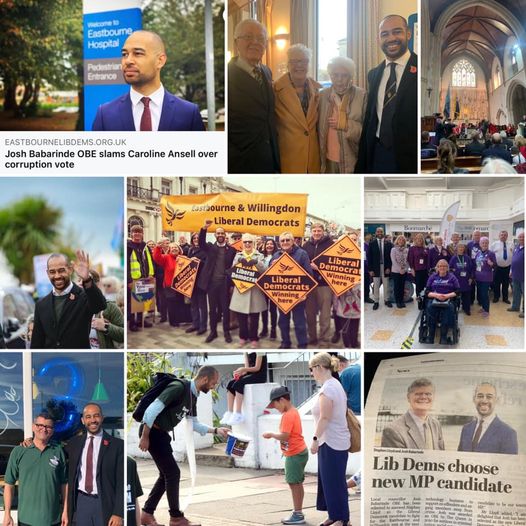 News from Josh Babarinde OBE, Eastbourne & Willingdon Lib Dem Parliamentary Candidate at the end of his first active week:
"I’ve wasted no time in rolling up my sleeves and getting stuck right in since being selected a week ago as the Liberal Democrat candidate to be our town’s next MP.
Here’s some of what I’ve been up to in my first week in the job:

Joined Purple Tuesday campaigners to advocate for businesses to be more inclusive toward those with disabilities.

Held our MP to account after she voted to meddle with anti-corruption rules.

Commemorated the service and sacrifice of the Armed Forces community at the Eastbourne Concert of Remembrance.

Met with Save the DGH campaign colleagues and pressed for action on the new hospital Boris Johnson has promised Eastbourne.

Supported residents with casework - quite a number housing support requests this week.

Spoke on a panel to inspire more LGBT+ folks to stand for public office.

At the heart of all of this has been supporting our wonderful town - and our precious planet - to thrive.

It’s a honour to be doing this work (a voluntary role I balance alongside my day job supporting entrepreneurs to build businesses) for the town that has made me ‘me’.

Much more to come over the coming months, years and beyond as our candidate and, with your support, as Eastbourne & Willingdon’s next MP."
Good Going Josh!
Photo credits to John Hesse and Matt @ Finegrain