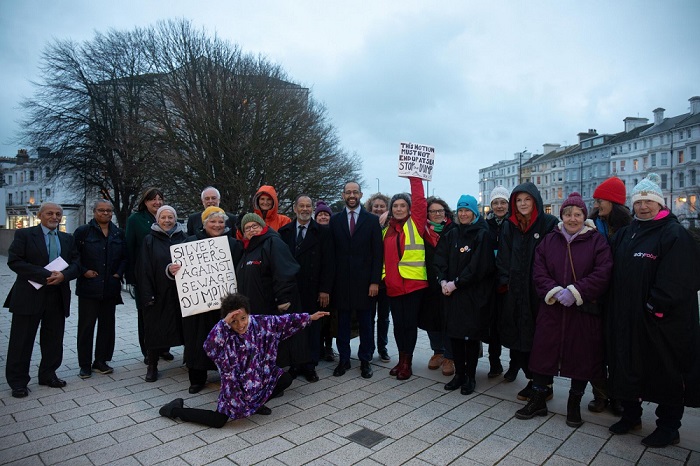 The Liberal Democrat Leader of Eastbourne Borough Council has condemned Southern Water for allowing hundreds of tonnes of raw sewage to flow into the sea and described their response as ‘disgraceful’.

The raw sewage discharge started on Saturday (February 5) evening following an electrical fault, but with no back up system in place the multi-million pound water company had to wait for a portable generator to arrive at the site.  The treatment works wasn’t fully operational again until Monday, meaning the untreated sewage continued to pour into the sea for nearly two days.

“Yet another raw sewage disaster courtesy of Southern Water and this time it’s in Eastbourne.

“I am absolutely furious that they don’t have a generator on site all the time, instead they have to wait for one to arrive while raw sewage is flooding into the sea.

“They can’t use their decaying Victorian infrastructure excuse this time, the water treatment works was built in 1997 and yet the response to an electrical fault is nothing short of third world, it’s disgraceful.”

With the huge increase in open water swimming in the sea around Eastbourne in recent times, local groups have also reacted angrily to news about Southern Water’s latest raw sewage discharge.

“Our wonderful coast is arguably one of Eastbourne’s greatest attributes and sewage pouring into the sea is putting this at risk.”

In 2021 Southern Water was sentenced to pay a record £90 million fine for widespread pollution after pleading guilty to 6,971 unpermitted sewage discharges; despite the size of the fine the company still reported profits of £138.8 million.

“Eastbourne’s tourism industry has been hammered over the last two years by covid and now Southern Water has put the raw sewage equivalent of a Great White Shark in the water off Eastbourne.

“Our hospitality sector is looking forward to welcoming millions of visitors during the summer and the last thing we need is Southern Water polluting the sea just months before they arrive.”

Southern Water has confirmed to the council that they are patrolling Eastbourne beaches for any physical signs of the raw sewage.

Liberal Democrat Parliamentary Spokesman Josh Babarinde OBE tabled and passed a motion at Eastbourne Borough Council to condemn Southern Water’s raw sewage dumping and calling on the government to get serious about regulating their activities.

“Southern Water must step up and take their responsibility to our coastline and our people seriously, once and for all. It is unacceptable that they reap enormous profits at the same time as polluting Eastbourne’s natural environment.

At the same time, the Conservative government and MP must wake up to this and implement robust measures to hold Southern Water to account. That’s why Liberal Democrats are calling for a Sewage Tax on the profits of water companies to invest in cleaning up our coastlines.”