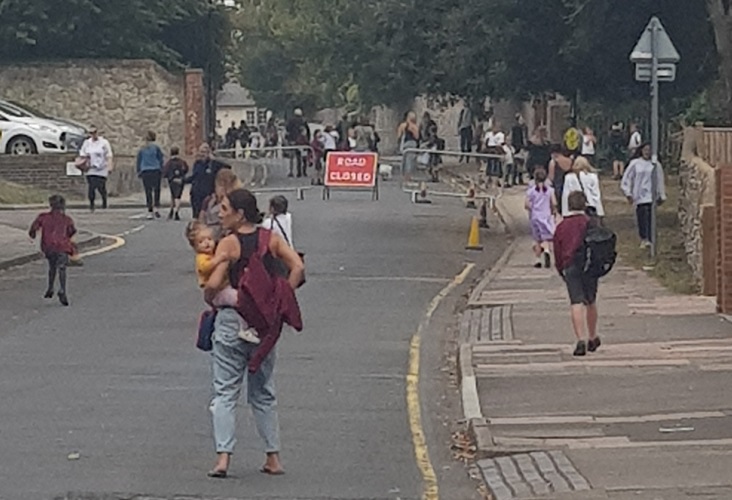 As part of the Eastbourne Walking Festival, and to mark World Car Free Day on 22nd September 2020, a section of Compton Place Road was closed to through traffic between 8am and 5pm.  This was designed to encourage children attending Gildredge House School (and their parents) to walk, scoot or cycle to school and, by closing the part of the road that runs alongside Manor Gardens, to provide a safer, cleaner and secure environment for them to do so.

A steering group was created some months beforehand which comprised local resident Antonia Lucas, Tom Nevill (organiser of Eastbourne Car Free Day) and Cllr Robin Maxted, also a local resident.  The local council were extremely supportive, especially Neil Peters from Neighbourhood First and Peter Martin, acting manager at EBC Events Team.  We would also like to thank the people who volunteered to help on the day.

Cllr Robin Maxted said “It was liberating for children who have to endure the stress of mixing with, and avoiding, heavy traffic along this potentially dangerous road on a daily basis.  The happiness, relief and newly-found security felt by the children was palpable, as some sang and danced down the middle of the road to school”.  Sounds of enjoyment were mixed with some memorable and poignant quotes from the children, such as “I’ve never seen such a wide pavement” and “why can’t it be like this everyday?”

With the support of local residents, staff, governors, parents and pupils of Gildredge House School, Upperton Councillors are working towards creating a School Safe Zone, where this road closure could eventually happen every school day between 8am to 9am, and 3pm to 4pm.